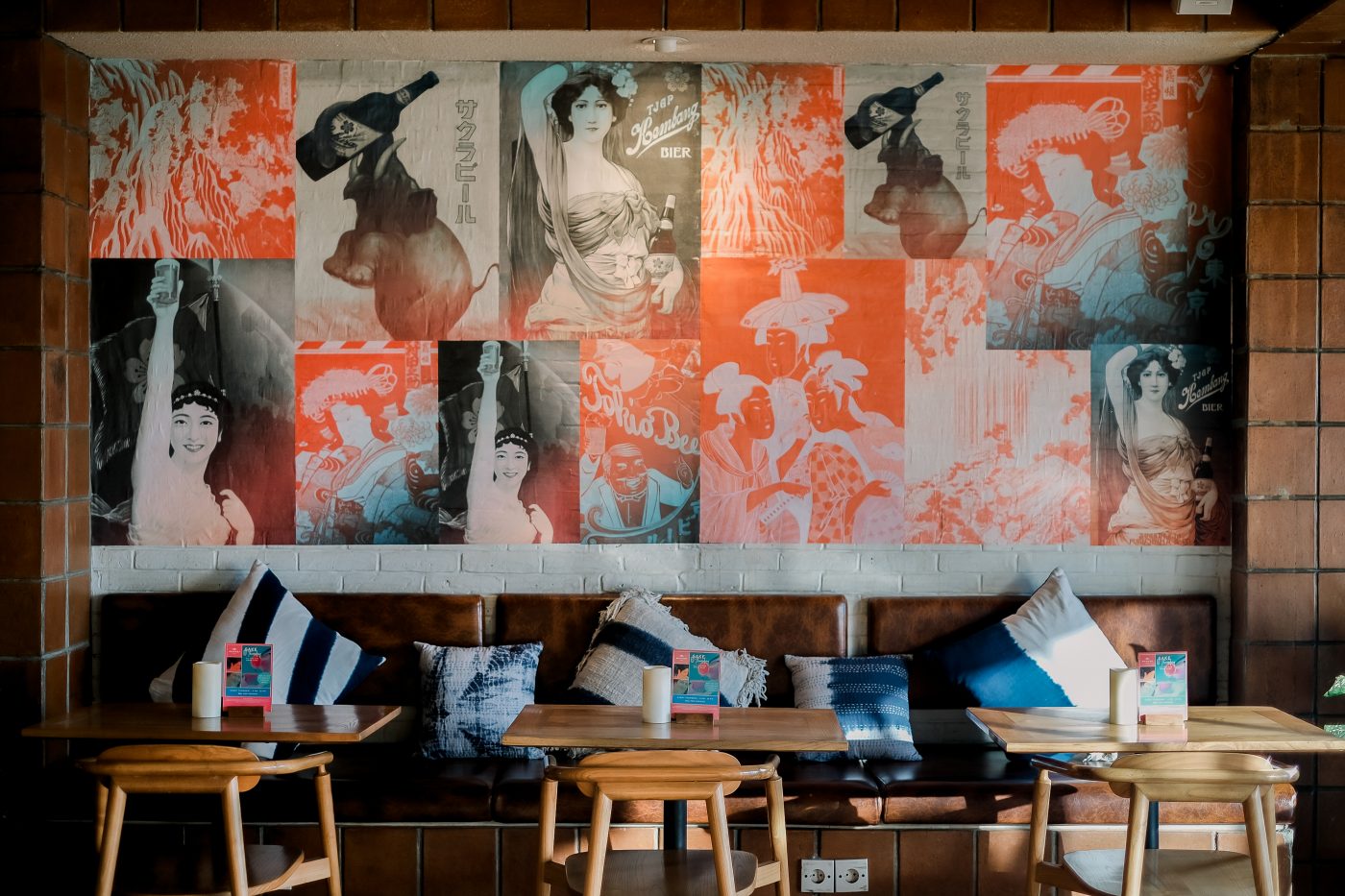 We met with Banny Parasutha, the co-founder of Kaminari Group, a holding company of numerous renowned Bali-based Japanese restaurants on a gloomy day of pandemic. Even though the economy and business are currently weakened, we didn’t feel any negative vibe come out from Banny.

He said, the only key to survive during the pandemic is our keep-going attitude, it’s crucial for any of us to eventually overcome our problems. What has been helping him survive until now is by continuing to think positively. This way of thinking mustered his positive energy and he has always been a firm believer that whatever energy you give out, you will receive back.

Kaminari, in Japanese, means “lightning”. Just like lightning with its great energy and as dazzling as a flash of light, that is how the name Kaminari Group is perceived in the FnB industry. Not a lot of Indonesian FnB groups have both big names and high credibility, but Kaminari Group is one exception. Consistently living up to their commitment serving only the highest-tasting food in an attractive, memorable, and well-prepared concept in each restaurant, have put the group’s quality at the top.

“We always highlight each of our restaurant’s concepts as one of the value-added propositions – it’s like a stand-alone attraction that has a high selling value. Before the pandemic happened, Rajawali and I, the founders of Kaminari Group, always went to Japan every year to learn about the latest food trends there. It’s safe to say that in the FnB industry, Indonesia is 2-5 years behind Japan so we always go there looking for new and fresh ideas that can be brought here. Our corporate culture roots come from Japan, so we feel we must always go back to our roots.”

Kaminari’s earnestness yielded extraordinary results. Since its establishment in Bali back in 2013, in a span of just seven years, they now have seven restaurants, Kaminari Catering excluded. The catering is busy delivering a curated menu selection for special occasions and Bali’s big events. Rayjin, a teppanyaki & dining bar, is Kaminari Group’s firstborn. Rayjin’s open concept kitchen was Rajawali’s idea, from which the inspiration came from having worked at a teppanyaki & dining bar for several years in Japan. Armed with this experience, he returned to Indonesia and met Banny, who at that time had just finished his education at a hotel school, and they agreed to open Rayjin in Bali. Their ideas are so unique that they are accepted by Balinese and tourists alike.

Dahana, another Kaminari’s establishment, was already running for 8 years at that time. Run by Rajawali’s mom, the concept takes form as half restaurant and half gallery. When Raja came back from Japan, his mother offered the gallery space to be transformed into a dining place, which then turned into what we now know as Rayjin. A year after Rayjin stood on its feet, the second floor was renovated and Kajin was born. A brainchild of Rajawali, his mom, and a Kaminari’s partner who just got back from Melbourne, Yogi – that is. Dahana is a traditional family restaurant serving Japanese home-cooked food. Just like Rayjin, Dahana is also considered successful, enough to make Kaminari confident to open a new restaurant with a concept that is no less unique. This time, Kaminari goes all the way with a sushi and sashimi bar concept that is only open to a maximum of 18 guests. The idea is considered brilliant since it prioritizes an intimate atmosphere and Kajin, 花神 japanese for ‘God of flower’, is what they named it after.

The next Kaminari’s brainchild is called Musubi, a modern restaurant offering collaborative Japanese and Western menus which is another success, due to its diverse menu’s ability to reach wider markets. Kinjo, a dessert bar that sells Japanese dessert Kakigori, is the newest establishment in Bali. Kaminari Group is a master in creating, innovating, and maintaining reputable restaurants through excellent Japanese-style service and great food. There is no doubt. With a good reputation, the name Kaminari finally reached Jakarta’s eyes and ears and attracted the no less famous and prestigious FnB group, Biko Group, to work together until the two collaborated in the FUJIN restaurant and Acta Brasserie in Jakarta. Not only strong in concept and taste, one of the important things that brought Kaminari to this day is their company’s core values. If you were to ask what makes Kaminari, Kaminari, it is Banny and Rajawali’s principles that are at the root of the company’s values. The founders of Kaminari share a common focal point, and that is human resources. Both of them are of Japanese blood but were born and raised in Bali, who then agreed to combine the two cultures they learned from childhood, Japan with its discipline and Indonesia with its warm hospitality.

As co-founders, their only goal is to develop the potential of their employees. Everything starts with very simple things such as responsibility, discipline, cleanliness that were instilled from the start and eventually became the core values of Kaminari. Through Kaminari, Banny and Rajawali want to take part in improving the quality of the people in Bali, especially young people. When Rayjin was first opened, Banny and Rajawali tried to put the core values they wanted to apply in their company in the form of a manual. It is very unique how this book does not discuss proper cooking methods such as cutting meat or vegetables but more on how to apply good personal habits in everyday life. Starting from coming to the office fifteen minutes before working hours to how to communicate with colleagues, superiors, and customers – everything is discussed in the book.

We are really implementing Omotenashi (a Japanese way of hospitality) in our company. Omotenashi can be interpreted as providing the best meal or service through manners carried out with a sincere and wholehearted feeling.

According to Banny, Omotenashi as Kaminari’s core value is to serve and to serve is closely related to humans, not products. We are very aware that what we have to maintain and develop first is the person. If the people are qualified, others will follow, including the product itself.

Another interesting fact is that Kaminari is never afraid of losing employees. Every time Kaminari recruits, Banny tells his employees that they all have to have dreams and aspirations. Whether it is to become a restaurant manager, or to open their own business, Kaminari is the right place for them to study. When one day they are ready to go and find a good place to work with a better position, salary or other opportunities, Kaminari will always provide support. The most important thing is that they are ready to compete in the hospitality industry because after all they will carry the name and pride of Kaminari.

In the end, all of the visions that Kaminari is aiming for are to prosper the people of Indonesia, especially Bali. With the Covid-19 pandemic that seems never ending and attacking the economies of almost all countries in the world, according to Banny, in Indonesia itself, the city of Bali will experience major difficulties in carrying out the economic recovery process. The reason is that the livelihoods of Balinese people today, most of which lie in the tourism industry. When compared to Jakarta, the target market for business players in the hospitality and FnB industry in Jakarta is already in Jakarta. They can’t go anywhere. When the market is ready to be revived, the process is naturally easier. This is in stark contrast to Bali where the market is more tourist-dependent, so it not only requires market readiness to return but also policies from the countries of origin of these tourists to open their international borders. It is for that reason that Banny hopes with this pandemic, the Balinese are starting to realize that they cannot continue to depend on their lives solely on the tourism industry.

If we travel back in time to 1970-1980, tourism at that time really helped the economy of the Balinese, but people did not live merely from one industry but also through the agricultural, plantation and livestock industries. Compared to how different the situation is right now, most of the Balinese, especially young people, prefer to sell their land and move to the city. In their minds, there is no longer a desire or desire to manage agricultural land. Which is very unfortunate considering cities’ bright lights have omitted young people’s ability to see the bigger picture. Eyes were so blinded that land potential or what it could produce are so hard to acknowledge, even though the ancestor’s inheritance are a gold mine for younger generations, and for Bali as a whole.

Let this pandemic return all of us to zero, to square one. So that we can again see, realize, and revive what is around and in front of our eyes. Come back to nature.